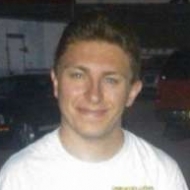 This user has not added any information to their profile yet.

Win the Battle at the Brickyard!

Opinion Area
Elkhart Lake's kart track
Paul is very helpful and supportive, and the kart just works. It responds to small changes the way I expect it to. It's the best kart I've driven in a decade.

National level is the best, getting to see friends from across the Eastern states and run against the best drivers in the sport. I'm as good as I am because I ran with Ryan Cassity for years, and after the Brickyard I can say I've gone head to head with Brandon Jarsocrak, one of the best young guns today, and I held my own. You don't get that sort of experience or level of validation running at one track all season.

I'd prefer a faster package and a disk clutch, but you can't really argue with the rapid growth of 206 participation over the past number of years when 4-cycle was virtually dead after the Flatheads went away and the Animals proved impractical.

People today don't want to monkey around with spending hours mounting traditional bodywork, and everyone is building karts that are at least compatible with CIK, so it should become the standard. It certainly behaves strange in a collision and doesn't look as good as a big 4-cycle nose, but nobody else uses it anymore outside of the USA and 4-cycle karts.